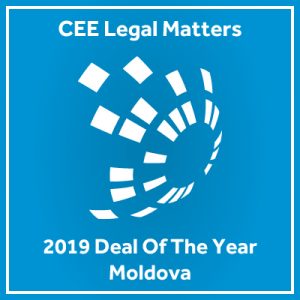 Competition Law Firm of the Year

5 lawyers are recommended in The Legal 500 Europe, Middle East & Africa 2017 editorial (listed below)

New 2017 edition of The Legal 500 Europe, Middle East and Africa has been launched yesterday.

ACI Partners Law Office has been recommended as a TOP-TIER FIRM in Moldova.

What the team is known for Market-leading firm present on a number of key deals. Advises on corporate, banking, competition, tax, employment and IP issues.

“They developed into a good firm that works in the Western style. I can appreciate that and I am delighted to have such colleagues,” a source says.Significant clients Coca-Cola, Steinel, Microsoft, EBRD, EIB. Notable practitioners  Managing partner Igor Odobescu advises on financing transactions as well as assisting with arbitration cases.Cristina Martin focuses on regulatory issues and also acts on significant investment projects and acquisitions. Sources describe her as a “very hard-working, excellent corporate lawyer.”Carolina Parcalab specialises in competition and data protection cases as well as international arbitration mandates.Up-and-coming individual Andrei Caciurenco assists with IP and IT matters as well as M&A

Chambers Global 2013 Edition ranks two ACI lawyers: KEY INDIVIDUALS Managing partner Igor Odobescu “was able to address all our needs immediately,” confirmed a client. He advised Nielsen on the corporate restructuring of its Moldovan subsidiaries following the acquisition of MEMRB.

Up-and-comer Carolina Parcalab is “not afraid to take on responsibilities,” according to clients. They appreciate her prompt advice and confidence. She was part of the team advising Avon Moldova on complying with competition regulations.

We have been awarded the CEE Deal of the Year 2020 in Moldova for advising on the acquisition of Red Union Fenosa SA and Gas Natural Fenosa Furnizare Energie SRL (currently known as Premier Energy companies in Moldova) from Naturgy Inversiones Internacionales SA. The target, the biggest business in Moldova, is the leading electricity supply and distribution company in the country, holding a 70 percent market share in electricity distribution in the center and south of the country and covering two thirds of consumers in the country. The transaction value constituted EUR 141 million, being the biggest private deal concluded to date in Moldova. The transaction involved multiples jurisdictions.

Igor Odobescu, ACI Partners Managing Partner, has been awarded a Leading Lawyer position at IFLR1000 (2014 edition). This is a fair addition to his Legal500 Recommended Lawyer achievement and Best Lawyers chair in the Advisory Board. Igor Odobescu leads Banking & Finance, Capital Markets and Real Estate Service Lines and is highly skillful and practical in Due Diligence procedures. He is a leader at academic achievements as well having earned both MBA and LLM degrees at top European universities.

Igor Odobescu, ACI Partners Managing Partner, joins the Advisory Board of Best Lawyers. Best Lawyers Advisory Board brings together the leaders of many of the most distinguished law firms around the world and general counsel from Fortune 500 and Global 500 corporations.

ACI Partners, the most dynamic law firm in Moldova, headquartered in Chisinau and having its Representative office in London, has rushed to the top ratings of the Legal 500 EMEA 2013 Edition.

At ACI Partners Law Office, ‘all services are provided on time and correctly by a professional law firm well above many others’. Managing Partner Igor Odobescu is‘a good manager, always polite and punctual’.

He and Carolina Parcalab, Serghei Filatov, Daniela Sipitca, and Veronica Bradautanu are ‘very pleasant and professional‘. Litigation specialist Marina Zanoga joined from Turcan Cazac, continuing the firm’s steady growth trend. The team has been advising Frontera Resources on oil and gas projects and representing The Republic of Moldova in cooperation with DLA Piper in a €50m ICSID arbitration.

ACI Partners was highly recommended by Chambers Global 2013 Guide: “This firm grew out of Ernst & Young Legal and has established itself as a major provider of corporate advice to international clients. It handles cross-border work, and with a representative in London is able to service Moldovan clients with interests in the UK. The firm advises on M&A, share transfers, restructuring, infrastructure projects, competition law and financings. A recent highlight saw the firm representing the government in a EUR50 million claim brought by a foreign investor before ICSID, the first case to be brought against Moldova. Big-name clients include the EBRD, BT, Coca-Cola and Raiffeisen Leasing.

Sources say: “The lawyers are highly capable communicators.” “They provide excellent solutions at a reasonable price; we are happy with their performance and fees.”

ACI Partners has been successfully chosen as the winner of the 2013 Corporate INTL Magazine Legal Award for the following category: ‘Litigation Law Firm of the Year in the Republic of Moldova’

For the third time and second consecutive year “Competition Law Firm of the Year” Award goes to ACI Partners. During recent years ACI Partners has created a very strong Competition Law practice. Two competition law experts from a top Moldovan law firm have joined ACI Partners during past two years. Carolina Parcalab is one of the few lawyers in Moldova listed as Competition Law expert in both Best Lawyers and Who’s Who Legal. Marina Zanoga is also an expert in both Competition and Data Protection. Carolina has been advising on the drafting of the new Moldovan Law on Competition which follows along the principles of the EU antitrust legislation. Both Marina and Carolina are Legal500 Recommended Lawyers.

ACI Partners particular focus is on superb corporate advisory. Year 2012 was noted by a number of great achievements and client satisfaction in Corporate Law area.

We are delighted to inform you that ACI Partners has won Acquisition International’s Legal Awards for 2012 process in our favorite category: Corporate Law Firm of the Year: Moldova.

ACI Partners has won the second nomination within 2012 Corporate INTL Magazine Global Award process for the following category: ‘Full Service Law, Firm of the Year in the Republic of Moldova’

Igor Odobescu, ACI Partners Managing Partner, has been awarded a Leading Lawyer position at IFLR1000 (2013 edition). This achievement is due to both perfect client satisfaction and positive feedback of the Moldovan legal community.

Igor Odobescu leads Banking & Finance, Capital Markets and Real Estate Service Lines and is highly skillful and practical in Due Diligence procedures. He is a leader at academic achievements as well having earned both MBA and LLM degrees at top European universities.

IFLR1000 2013 Edition: “The firm is strong in litigation and was selected to represent the state of the Republic of Moldova in a €50 million ICSID litigation case brought by a French citizen. This is the first case that Moldova faces before ICSID.

With regard to Nielsen’s acquisition of MEMRB businesses, Igor Odobescu and Carolina Parcalab advised the clients on the corporate restructuring of the Moldovan subsidiaries. The restructuring spanned over 20 jurisdictions and involved legal and taxation issues alongside the requisite coordination and clearances with local authorities. Additionally, the firm represented Bemol in one of the biggest cases on cartel agreements in Moldovan history. The case involved most of the Moldovan petroleum products traders and the firm was able to refute all the alleged infringements brought by the Competition Authority.”

IFLR1000 2012 Edition: “ACI Partners is a bright, modern firm that is making waves in a very static market. Taking into account market opinion and deal flow it is definitely a firm that will be looking to the higher tiers in the next few years.

“ACI Partners is much more active than some firms above them. They have a modern, western approach too, which is good for clients,” admits one competitor. These clients too are pleased with the service they are receiving: “They are a young and energetic team of professionals, who have a good knowledge of the local environment and legislation”.

”The firm’s strongest mandates came in 2010, including a notable M&A deal. In this a team led by partner Igor Odobescu, an ever-present on the firm’s top work this year, rendered their services to Alliance Venture Capital Holding, a Canadian investment house, with regard to the acquisition of a wine plant. This deal also entailed a certain amount of debt reshaping as well as creating some innovative shareholding structures too. This international investment closed in August of 2010 for a figure that remains under confidentiality.

As expected, ACI has also become active on more distressed work too. This includes advising a confidential client that is about to enter insolvency proceedings. The deal is made notable as the European Bank for Reconstruction & Development (EBRD) might potentially be looking to be involved here, depending on the circumstances. This work is still currently ongoing, as the firm looks at the legislative framework in Moldova to find a solution.

Another noteworthy deal the firm acted on was one that brought about the construction of the first maritime port in the Republic of Moldova. Specifically, a team advised Danube Logistics, Bemol Retail, Bemol Trading and Easeur Holding with respect to equity-linked debt financing for the International Free Port of Giurgiulesti and also for a string of petrol stations across the country. Completing successfully in October 2010, the eventual sum for this deal also remains confidential.”

ACI Partners confirmed its status of a full service legal advisor with well-rounded practice and expanding experience in virtually any area of legal business existing in Moldova.

Acquisition International, one of the leaders in the industry, has given a fair notice of ACI Partners’ strengths and awarded the firm with prestigious title of the “Overall Law Firm of the Year in Moldova”.

IFLR1000 2014 Edition: “Described by peers as “active” and “robust”, the firm has top pedigree and came into existence in 2006 after separating its legal business from Ernst & Young in Moldova. It is led by Igor Odobescu and has, in recent years, developed a strong competition practice. The firm has received strong feedback from clients and competitors and it has also drafted more laws than any other law firm in Moldova. “Igor has always showed in-depth knowledge, professionalism and good reactivity,” one client says. ACI Partners advised Doehler Group on its acquisition of a prominent apple juice concentrate producer in Moldova. The transaction was multi-jurisdictional and ran across Moldova, the Netherlands and Germany. Also, Igor Odobescu led the team that helped the borrower Danube Logistics obtain $12 million for refinancing purposes, and for its expenditure in the Giurgiulesti International Free Port (GIFP). “I know ACI Partners as a local leading law firm with excellent professionals who deliver quality and value in its services,” one client says.”